Is life not an elaborate Goldberg Machine; like the old game MouseTrap? A complex state of affairs in which a series of actions are linked together to produce a domino effect in which activating one device triggers the next device in the sequence? Tempus Fugit! (Time is wasting).

Making and keeping friends growing up was like the Goldberg Machine. I knew that just one accepted invitation, (like the Goldberg) would trigger more invites, would lead to chit-chatty parties, and (gasp) sleepovers with Dads who made gross things for breakfast and Moms who would ask me if the cat had my tongue. Also, if one decided the risk was worth it, friendship could lead to hurt, wounded pride, shame, and not knowing what made me different.

I did manage a few friends only to realize decades later I was a like a ‘social work’ case: Friends because we were family, and they had to. Or one friend who accepted me hanging out at her house until pre-pubescence loomed. She once kept her preferred friend behind a closed door. I know because I sensed something amiss, pushed the door open a few inches and saw her there, her back to the door, sitting on the bed and waiting for our mutual friend to ditch me. She tried every excuse until one finally worked, to get me to go home, so she could hang out with the preferred (not-so-cleverly-concealed) friend. I really like this friend, and I do forgive her, but man, I knew what was going on, knew the real friend was waiting for my departure so the two of them could discuss normal pre-teen stuff like the latest diet soda, sneaking cigarettes, how to steal loose change from stepfathers, shaving legs, and using slang in witty cool ways! Things I was not especially hip to discussing, incidentally. How did she try to get rid of me? I’m bored. I gotta visit my aunt soon. I feel tired. Yawn. Yawn. I got the hint. Exit stage front door. One day I slammed it. Hard!

It seemed I could never find ‘my people’ then.

One kid put me in a closet (which I didn’t mind actually; because the kid and his brother were obnoxious) for the whole time I was visiting and pulled me out when he heard the parents coming down the hall. “This playdate went so well. We must have another one, soon!” Right.

Present and future spectrum children don’t have to be chameleons, don’t have to blend, to assimilate to environments, because they are accepted as they are, and cherished for that.

Instead of Autism Awareness month, we had Autism Acceptance month?

Blue lights, marching, puzzle-piece-wearing and the like may bring awareness, but do people have a desire to include? Come April, do they feel inclined to educate themselves and consider others perceive differently in unique sensory worlds? Autism is a whole year thing, it is a whole life, not a month.

I don’t see my youth as wasted, as horrible, as something I dwell on. But: it was unenlightened. I didn’t get a formal diagnosis of Selective Mutism and Aspergers until I was in my 30s even though I drew attention of the teachers my whole school career.  My mother put me in 4-H, Girl Scouts, Catechism, had me ride on floats, march in parades, go to Girls’ Camp; she brought me to adult cooking parties where the guy set the dessert on fire which, let me tell you was a fine and rousing experience. Was I especially chatty to the girls? No. Was I overwhelmed a lot? Oh yeah. But my inclusion in the groups, (speaking from my own inquisitive, solitary heart and brain) has given me memories I cherish: the smell of campfire on my clothes, the memory of looking up on the hiking trails, and seeing the awe-inspiring mosaic of criss-crossed tree arms, and oh yeah the dessert thing, the fire was dangerous and awesome (the dessert I would not eat because I didn’t trust it, but the memory is a good one despite the comments of “why is she like that?” Yeah, despite them.)

Reach out to children, autistic or neurotypical (NT), and be genuine. Say nice things. They can hear the “what’s wrong with her?” comments, trust me on that. So don’t say those things. Just be. When people say “Be yourself,” “be mindful,” “be in the moment,” know this is sound advice. Life, like cut flowers on caskets is fleeting. It really is and this becomes more apparent, the more days we have behind us. It is not easy for any child, let alone the different. Why should an additional worry of, ‘why am I different?’ be added to the weight children already carry today? I am pleased to see school exercise classes (always a horrible torture for me, clumsy, not knowing rules) offering alternative classes that are more solitary, for young people on the spectrum, like tumbling (for the younger), weight training (for high schoolers) and enriching things like yoga, even meditation. There is a snapshot in my mind of gym class skipped (I would duck out of line and into the bathroom as the class headed to the softball court.) There I’d sit, (yup, on the toilet) waiting for the buzzer to signal me to slip back into line when class ended. I even scratched the vile word ‘poup’ into the stall wall, because daring rebel that I was, this act of rebelliousness and cunning made me giggle behind my hand. If you’re wondering, I spelled it poup because I felt it should be spelled similarly to the word soup.

And speaking of snapshots of memory, when I was a kid, taking pictures cost money. You had to have a camera, buy the film, and pay to get it developed. If you had a Polaroid, well, the film was incredibly expensive, at least for my little family. When I pull out my incredibly disordered box of ‘old’ photos, it is not the faces I scan, but rather the background ephemera. It’s through a new lens of time having passed, that I see the camera records far more than the subject. What’s that box on the counter? Oh! I recall when that brand came in a box of that color and design. What’s that on the end table? Oh- my old plastic coffee cup. The favorite. The one I

used a knife on, to scrape off the stupid logo; the one that I used for two and a half years until the handle snapped off, I glued it back on, duct taped it for extra measure, and then used it six months more until it began to smell and acquired a leak I could not pinpoint…

What I’m saying is, in a round-about way, looking back through the lens of time having passed, I understand that friend (who I mentioned) who hid another friend away and ditched me. She has a great big heart and hey, who can blame her doing that? She didn’t want to hurt my feelings. The likes of me would’ve brought down her cred, so to speak. She was ‘developing normally’ and craved experiences I could not possibly have. Through no fault of either of us. It was a temporary time. It does not define the software tester, author, artist I am today. Transience is real. No time like the present as one says. So I use the skillsets I have to learn, to earn and to yearn (I honestly did not mean for that to rhyme!) and dam the rest of it, I am kind to myself.

There are fleeting moments to me, when a pattern in a carpet seems like sacred geometry; or the bare mosaic of tree canopy branches silhouetted in the sky, is a chapel. Memories of the girl I was who murmured her whispered words into a rotary toy telephone, “Hello?”

Diversity was celebrated? And kids were taught from an early age, that everyone contributes something valid to life.

Kids were taught to seek out the diverse among us- to learn and experience life in different ways? They would grow into adults who did the same. Without bio-diversity existing in our big sick troubled fragile sometimes terrible mostly amazing world, the world itself wouldn’t exist. Neither would people. 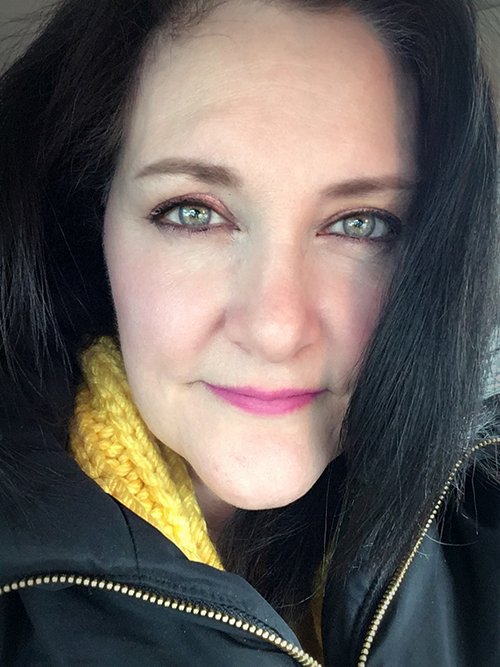 After receiving an Aspergers/Selective Mutism diagnosis in 1999, Kimberly stopped seeing herself as ‘less-than’ and felt empowered to write candidly about herself as a spectrum woman. Her memoir Under The Banana Moon was published in 2012. Kim’s writing has appeared in dozens of publications, including Autism/Aspergers Digest, Kaleidoscope, and Women from Another Planet. Kim, who resides in Connecticut, has been showing her artwork since 2005 in places like Good Purpose Gallery (where she also led a collage workshop) and Lesley College (where she has presented twice), to name a few. Her artwork has been on the cover of Hosseini’s Art of Autism-Shattering Myths, and on the cover of Sutton and Forrester’s Selective Mutism-In Our Own Words (where she has several chapter contributions). Kim’s art has been selected for the cover of Samantha Craft’s 2nd printing of Everyday Aspergers. Kim is a software tester too (finding bugs in software) and her passions include raising actual bugs, her two cats Ashi and Po, environmental protection, painting animated trees (she is Vice President on BOD with Art of Autism), collecting vintage papers for collage, autism acceptance and advocacy, and building faery villages. She is currently illustrating a children’s book for her speech pathologist. Catch her blog (here) or LIKE her author page and say hello!