“What’s wrong with him, then?”  The man gawped at my nine-year-old son, taking in his noise-cancelling headphones, the belt around his waist and the strap attaching him to the dog.

He then turned his full attention to me. He stared, demanding a response, expecting a justification to be provided for why we had brought a dog into the shop and were queuing beside him. Darragh was impatient for us to pay and leave so that he could enjoy his chosen treat for being a great boy that week at school.

“Nothing. There’s nothing wrong with him. In fact, he’s wonderful.” I tried my best to summon up a sweet smile, even though the thoughts in my head at that moment were anything but sweet.  The man looked confused and slightly affronted. It didn’t occur to him that he had asked a spectacularly insensitive and inappropriate question. Not remotely. And Darragh was there. Right there. Standing right in front of him.

We paid for our items and the cashier gave us an encouraging smile.

We were a familiar sight to the staff in the shop, who always made us feel welcome.  Some of them had witnessed what could happen without the dog.

One day, Ash (who has his own “Ash the Assistance Dog” Facebook page, by the way) got into the mud during his morning run so I took Darragh to the shop without him. Big mistake. While we were at the till, the automatic doors at the shop’s entrance opened and Darragh spotted his chance. He broke away from me and he took off at high speed.

I chased after him, flinging my handbag into the middle of the garage forecourt, thinking to hell with the mobile phone, I can always get another one, and screaming to passers-by for help (they didn’t), as Darragh ran up the middle of the road towards a busy intersection. My heart pounding and lungs bursting, I managed to grab the edge of his hood – thanking the gods I had dressed him in a hoodie – and gained enough purchase to drag him back to me and off the road.

We were both very lucky – neither of us had looked left or right before sprinting straight out into the road.  It was a Saturday afternoon and it was a miracle neither of us was hit by a car.

When we decided to apply for an assistance dog for Darragh (after a series of bolting and wandering episodes) we knew we would, as my husband put it, be “making the invisible visible”.  Every time we take Darragh and Ash out together, we are effectively putting his disability on display.

We get a mix of reactions when we run the gauntlet in public. Most people are friendly and give us an encouraging smile. (It helps that the two of them are adorable.) We appreciate those people so much.

We usually get excellent service in shops and restaurants. Having the dog means we can finally eat out together as a family which was a big deal for us beforehand, back in the days when we felt like virtual prisoners in our own home.  Other people are not so nice. We do get some nasty, disapproving judgmental stares.  There are still those who appear to believe that disability should be hidden away so that “normal” people shouldn’t have to deal with it.

We don’t care. Our son’s safety and comfort are much more important to us than the sensibilities of narrow-minded people.  Darragh needs to be able to experience and explore the world around him and participate in it.

I have chosen to be open about my own autism as well.  Again, there are a mix of reactions but I can use the fact that I’m “out and proud” to educate people about the condition whenever suitable opportunities arise.  I do this more for Darragh’s sake than for mine. Hopefully, the world will be a more understanding, more accepting and kinder place in the future as more people grasp the fundamentals of autism and learn how to respond better to it.

Autism has its challenges. Of course it does. I know of parents who have been used as a punchbag by an overwhelmed child struggling to communicate. Many parents are dangerously sleep-deprived. We still get accused of bad parenting. We get unsolicited parenting advice and information on the latest “cure” foisted on us by people who generally mean well. There are tough days. But we love our children fiercely and unconditionally, or at least we should.

When I look at my son, I don’t see anything “wrong” with him. I see beautiful blue eyes. I see gorgeous blonde curls. I see perfection. Darragh really does put the “awwwww!” into autism, which is as much a part of him as those blonde curls.  I love the whole package.

I see a child trying so hard to learn and to make sense of the world.  I see others fall in love with him as they help us to help him to do that.

He makes me proud. 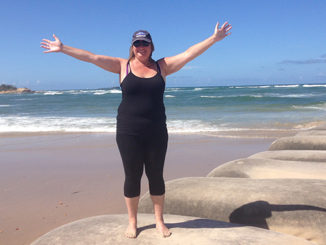