Say I’m sensitive. Do not enlighten people with neurology 101 or explain how I feel sound like whispers are feathers and pow wows are heart beats and a dog squealing in pain stings like needles.

Say I meditate. Don’t say transcendence is one of your hobbies. No one knows what a zen master actually does anyway. Be general and vague.

Say I’m a walking encyclopedia a treasure trove of information knowledgeable well read observant. Do not hint that I download skills like Neo in the Matrix.

Say my social skills suck. Don’t say I don’t understand the point of small talk gossip competition or backstabbing. Say I like deep conversation and cooperation.

Say you’re psychic that’s apparently more believable than saying I know so much stuff I read things like liturgy on houses and people make accurate random conclusions can see abuse on your life like a kick me sticker on your soul.

Say I feel your pain don’t say I can’t go to bars because I feel their pain or dance clubs because of bad woo. Say I like mellow classy places or spending time in nature.

Say I like kids and animals because they are honest and know more than you think play be happy and have a treat. Don’t bitch about neurotypicals fucking with your reality.

Say I prefer organic food. Not I don’t eat bullshit it makes me sick. Say you can tell a lot about a person by what’s in their fridge. Don’t tell people you are what you eat and their food is dead fake and stupid.

Say I have the handwriting of a world class doctor. Don’t ask people how they slow down their thoughts to an output speed that is legible on paper.

Say I practice reciting poetry a lot. Don’t say I’ve been memorizing and reciting since I was three before I could read and don’t see what’s so hard about it.

Don’t’ talk about oneness numbers music notes binary physics nature words matter sound is all connected the same one thing. Nope, it’s way too deep for every day conversation unless you’re autistic or something like me. 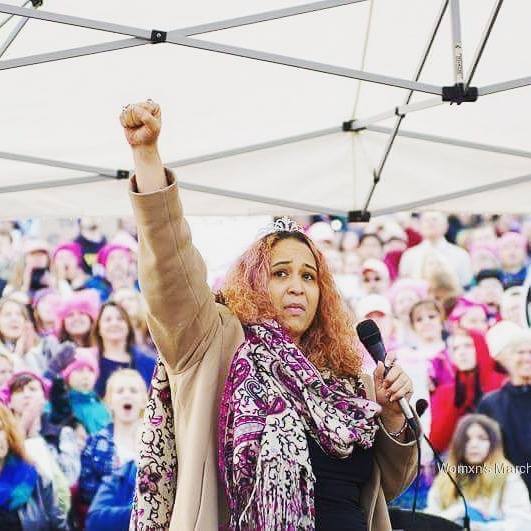 Lennée is a geeky veganish eclectic mystic poet activist survivor goddess on the spectrum who doesn’t like labels. She has appeared in the UPS DIRT! project, Creative Colloquy, Tattoosday, Lost Tower, Works In Progress, and her chapbook Universal State of Mind, published by The Girl God.

Lennée has featured and slammed across the country, was The Olympia Peoples Mic first WOWPS representative, opened for Pussy Riot, was heard on Paradigms, Tell It Slant, and Wheel of Wonder. Her spoken word album The Second Coming of Matriarch is available at lenneereid.bandcamp.com