First of all, I want to state that I am privileged and my basic survival needs are covered. Nowadays, and for the past ten years or so, I can make ends meet.  I am, by the standards of most “civilized countries” (not in all domains…), rather poor.  I am disabled, often invisibly, due to my autism. I live with my partner in a one bedroom rented apartment; we do not have a car, and I qualify for many low-income programs, but I am relatively healthy and I have quality health coverage and my health.

This in turn means I have relative peace of mind, which is quite important to me and in order for meditation to become something one can explore.  Thus, this article is written for those with similar privileges, and many of us in “civilized countries,” are privileged after all.

It is difficult to write or speak about meditation because words are not enough to explain or express what it is.  What is does is also different for each person, though the main positive aspects are often similar, for example, growing the seeds of compassion that are in all of us.  But it can’t be explained in a rational linear way.  Many who have not heard much about it think it is a difficult, “out there” practice, but it is not.

I heard this many years ago, I forget where, and I always liked it.  We can learn a recipe by heart, we can have all the ingredients on hand, but as long as we don’t do it, we really don’t know it. How fortunate I am to have stumbled upon Zen.

It was twenty years ago when a friend gave me a book about Zen and meditation. I was lucky to be introduced to it, and since I had been searching my entire life to understand what was going on with me, I decided to explore it. After first trying meditation during a two-week vacation, I went to live for six months in a Zen monastery.  Many friends thought I could never be still and quiet, but in fact, any one of us can if we decide to, even if it is only for a few minutes a day at first.  Little by little this time increased.  For the first eight years or so the storm in me still raged.

The most immediate thing I realized after six months is that since I can’t control my hypersensitivities (the worst of it was sound sensitivity), I am not to blame for them.  The quiet of the monastery soothed me with, for example, its practitioners often in silence and if not in silence, at least whispering. Doors were built on sliding hinges, lights were low, movement was minimal, and everyone was paying attention… Still, I was nervous.

Meditating together is a way to engage socially with few social cues and little sensory stimulation, so it is perfectly suited to autism. I feel meditation has helped me engage socially in ordinary settings, and it has helped me deal with my sensory issues.  Autism self-advocates, my partner and I share about our years of experience practicing meditation with autistic adults. (See www.Autsit.net).

The practice of meditation increasingly offers evidence-based benefits.  It is a good practice for neurotypical and autistic people alike, but since hypersensitivity is such a challenge for many autistic people, it makes sense to work on calming the nervous system.  Looking inward often comes naturally to extremely sensitive people. Simple meditative practice leads one to take a look at one’s own, sometimes harmful, assumptions.  It encourages a shared humility that can be helpful for autistic people and their parents. It happens also that Zen monastic forms, with their silence and stress on low stimuli, are autism-friendly.

Nowadays, with my partner Greg, I facilitate a monthly meditation group for people on the autism and neurodiverse spectrums.  We also organize a yearly meditation retreat for them (see www.Autsit.net), and we present at conferences on the subject. 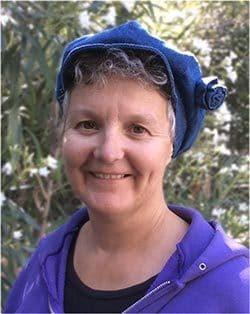 Anlor (from Anne-Laure) Davin is autistic. She was diagnosed at age 46, a life-changing, and life-saving, event she traces to her Zen practice of the years preceding. Anlor is an immigrant, born in France in 1964. During Anlor’s childhood her native France was in the grip of oppressive and now discredited theories about autism. Anlor instinctively knew she had to flee France in order to survive.

Upon arrival to the Unites States in 1987, Anlor lived in Chicago, Illinois, were she married and had a son. The ensuing eighteen years of child-rearing, a tremendous challenge for an autistic mother, overwhelmed her and her life slowly but surely unraveled. Forever searching for answers to the challenges of an undiagnosed autistic life she moved to San Francisco, California, in 1999. There she started a Zen practice while she eventually became very ill and “hit bottom”. In March 2000 a painful and debilitating movement disorder appeared in her left upper body.

Anlor was finally formally diagnosed in 2010. With proper medical care and many other supports her life improved unexpectedly and dramatically. This healthy outcome and Anlor’s later fullness of life give her a secure place to stand and reflect with greater clarity on her journey. She now lives near San Francisco with her partner, her son living nearby.